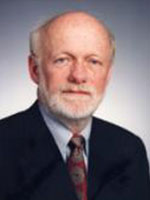 The late Julius Axelrod, Ph.D. received the Nobel Prize in Physiology or Medicine in 1970 for his pioneering research on catecholamine neurotransmitters, a group of chemicals including adrenaline, noradrenaline, and dopamine. He was an inspiring and indefatigable investigator in neuroscience and pharmacology throughout his lifetime and well beyond his "official retirement". Julie contributed much to our understanding of brain chemistry and how brain cells communicate with one another. Those findings laid the groundwork for present day treatment of behavioral disorders such as depression and anxiety. A humble man who preferred the "bench", to the "limelight", Julie is also known as a mentor of another generation of successful researchers, who carry on the "torch" of scientific investigation and pursuit in the style instilled in them while under Axelrod’s tutelage. The Julius Axelrod Award was established in 1991 by the Catecholamine Club. It continues to recognize outstanding contributions in research and mentoring in the Axelrod tradition as the Julius Axelrod Award in Pharmacology under the flagship of the American Society for Pharmacology and Experimental Therapeutics (ASPET). Julie’s legacy is honored by the selection of Palmer W. Taylor, Ph.D., for the 2009 Julius Axelrod Award in Pharmacology.

Palmer W. Taylor, PhD, is Professor of Pharmacology and the Founding Dean of the Skaggs School of Pharmacy and Pharmaceutical Sciences at the University of California San Diego (UCSD). He served as Chair of the Department of Pharmacology at UCSD from 1987 to 2003, and as President of ASPET from 1995 to 1996. Dr Taylor has made pioneering contributions to the study of synaptic pharmacology and neuroscience by providing detailed molecular insights into fundamental aspects of regulation at cholinergic synapses. The autonomic nervous system is comprised of the catecholamine containing noradrenergic neurons studied extensively by Axelrod and colleagues, and of cholinergic neurons that use acetylcholine (ACh) as their transmitter. Cholinergic neurons also serve critical roles in controlling communication between nerve and muscle, and between cells in the brain. The availability of ACh at cholinergic samples is controlled by the enzyme acetylcholinesterase (AChE) and synaptic transmission at nerve muscle junctions is regulated through the actions of ACh on nicotinic cholinergic receptors (nAChR). Dr Taylor’s laboratory has made innumerable seminal findings informing our understanding of the structure of AChE and nAChR and their function in cholinergic neurotransmission.

AChE plays a critical role in terminating the actions of ACh and is the target for war gases and insecticides as well as for therapies for myasthenia gravis and Alzheimer’s disease. Dr Taylor’s recent work on neuroligin, a cholinesterase homologous synaptic adhesion protein associated with autism emphasizes further the biomedical relevance of his research and demonstrates his characteristic use of multifaceted approaches to dissect structure and molecular mechanisms. Dr Taylor’s studies of the nAChR underlie much of what we currently know about the structure and pharmacological regulation of this receptor. His recent crystallographic work defined the molecular features of the acetylcholine binding protein (AChBP) as a receptor surrogate and detailed the changes that are induced by ligand binding. This work is paradigmatic of the rigor, impact and insightful use of novel approaches that makes his research so valuable to the scientific research community.

Dr Taylor has recently developed collaborations with Nobel Laureate Barry Sharpless to use AChE and AChBP as prototype targets for "in situ freeze-frame, click chemistry" a novel approach for generating high affinity inhibitors. Given the importance of AChR and AChE as drug targets, the translation of Taylor’s basic molecular work in directions critical for discovery of new therapeutic modalities further underscores the continuing impact of his research.

Palmer Taylor, like Julius Axelrod, is remarkable for his humility, his determination and his accomplishments as a mentor. He has trained a multitude of graduate students and postdoctoral fellows who have gone on to prominent careers in industry and academia. As director of a large and longstanding NIH funded predoctoral training grant in Pharmacology, and through his dedicated graduate and medical school teaching, he radiates his enthusiasm for Pharmacology to an audience well beyond those he directly mentors. His excitement for science cannot help but motivate others, and the breadth of his knowledge challenges trainees and colleagues alike to work to achieve the degree of scholarship and determination that has been the hallmark of Dr Palmer Taylor’s career.