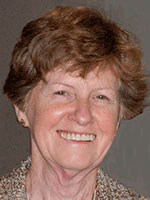 Dr. Elaine Sanders-Bush has been named the 2011 recipient of the Julius Axelrod Award in Pharmacology by the American Society for Pharmacology and Experimental Therapeutics (ASPET). Dr. Sanders-Bush is a Professor Emerita of Pharmacology at Vanderbilt University and former Director of the Vanderbilt Brain Institute. The Julius Axelrod Award is given to recognize outstanding scientific contributions in research and mentoring. The Award was established to honor the memory of the eminent American pharmacologist who shaped the fields of neuroscience, drug metabolism and biochemistry.

Internationally known for her research on serotonin, a key brain chemical involved in normal behavior and brain diseases such as major depression and schizophrenia. Dr. Sanders-Bush arrived at Vanderbilt University in 1962 to pursue graduate training. She earned her Ph.D. in Pharmacology and after postdoctoral training in psychopharmacology, she joined Vanderbilt as Assistant Professor of Pharmacology. During her tenure at Vanderbilt she has made seminal contributions to our understanding of serotonin synthesis, metabolism and function. Her research has made a lasting impact on the field and helped shape our understanding of these important research areas.

Dr. Sanders-Bush has also been a leader in development of neuroscience research and graduate education at Vanderbilt. She led the creation of a new Ph.D. program in Neuroscience and served as its director from its inception in 1997 until 2008. She has always taken a strong interest in training the next generation of neuroscientists, including the establishment of a partnership with Meharry Medical College to develop an innovative program for increasing diversity in scientific research. In recognition of this outstanding commitment, she won Vanderbilt's first Levi Watkins, Jr. Award for Leadership in Diversity in 2002.